From June of 2017 to March of 2018, I worked as a contributor to a popular New York Rangers website, Blue Line Station. This website was a member of the Fansided Network which is the site host to hundreds of sports and hobby websites. At Blue Line Station, I worked as mainly an analyst of the team who used statistics to generate educated opinions. 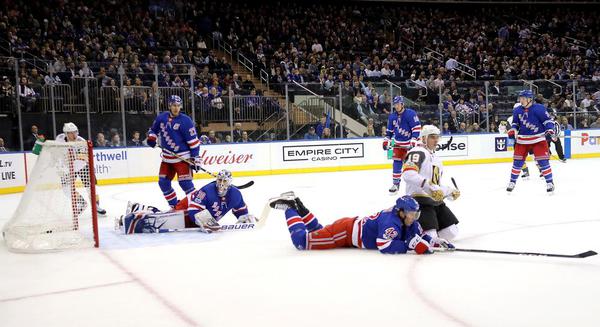 New York Rangers: Five trades that got them in this mess

What do Jeff Gorton and Glen Sather have in common? They both have made their fair share of poor trades. They did that with good reason and good intentions. Both men believed that since 2012, the Rangers have had the capability of winning a Stanley Cup. Any good general manager would have done the same thing if they were in the same position. The only thing the Rangers did differently was how they went about their trades, and how often they did it. There were a lot of marquee players added i 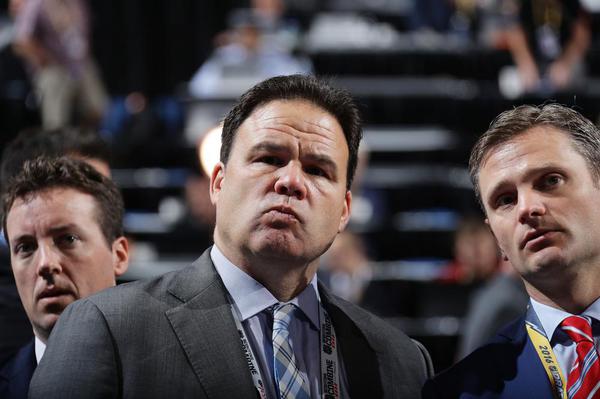 The apple doesn’t fall too far from the tree for the New York Rangers’ front office. Like his predecessor Glen Sather, Jeff Gorton takes a backseat each season. The more he does this, the more his team gets hurt and it shows especially now. Sitting out of a playoff spot is due in part to both poor coaching and management. While Jeff Gorton’s job is in no well-known danger, he needs to start acting like it’s on the line. Let’s take a look at his performance so far in his tenure. It’s safe to sa 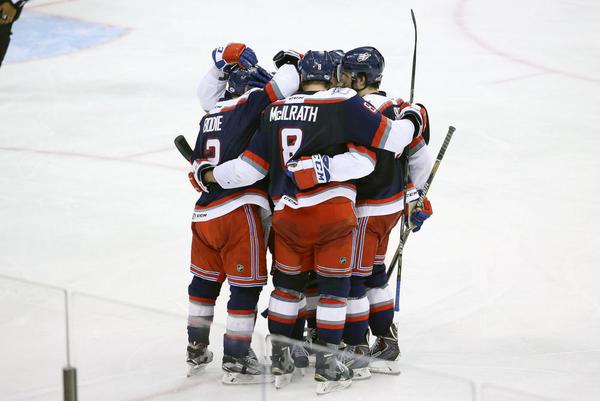 New York Rangers: An update on the Hartford Wolfpack

For many fans, there was hope when the Rangers drafted Lias Andersson and Filip Chytil with the seventh and 21st picks in the draft, respectively. However, the problems with the Wolfpack are far worse than just what two players could solve. The team still needs a complete overhaul. Upon taking a closer look at Hartford, the problems are quite evident and in some cases, worse than one could imagine. With that, let’s take a closer look at the Hartford Wolfpack… 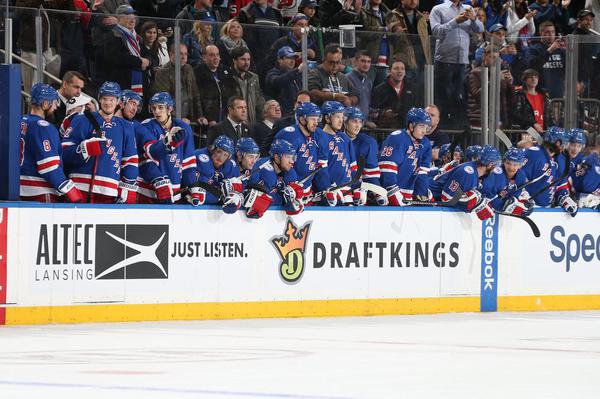 In the modern day NHL where the salary cap reigns supreme, bargain players make up an important part of any team. The New York Rangers are just one of 31 teams that rely on cheap yet productive players to help increase the chances of winning a Stanley Cup. Looking at the Rangers roster, it is obvious that there is a lot of talent. These gifted players are vital to the Rangers hopes of winning the Stanley Cup now and in the future. More important, however, is the deals players are signed to​ 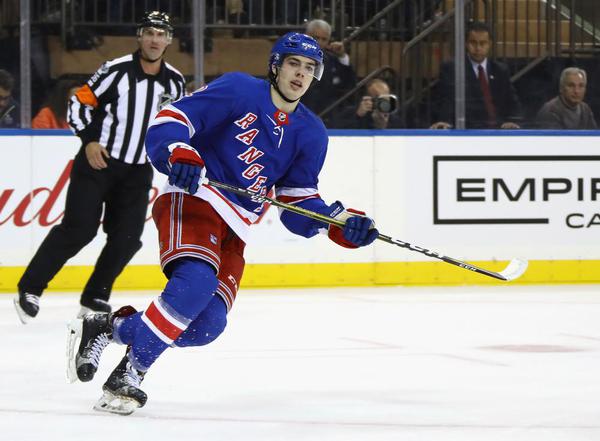 New York Rangers: Three players given up on too early

The New York Rangers have notoriously not drafted well. However, when young talent does make the NHL lineup, the team is quick to move on if they don’t immediately produce. If they’re lucky, they get sent down to Hartford where they at least have the chance to work their way back to the show. If the Rangers truly want to be a contender not only now, but in the future, they need to be more patient with their young players and finally give a chance to grow. Here are three players that the Rangers 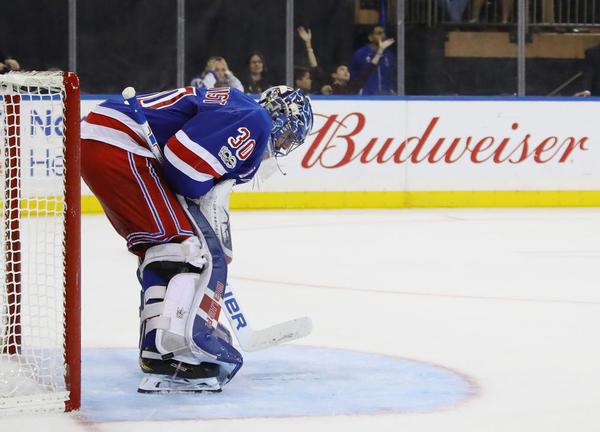 New York Rangers: Five trade options that can solidify the defense by William Schneiderhan The phrase “dumpster fire” can be used to best describe the Rangers season. As it stands now with 20 points in 20 games, the team looks like they are heading straight for the golf course in April. This is for a variety of reasons. Firstly, the team has been extremely inconsistent and at times is simply not playing well. The second issue is that Lundqvist has not been as good as you’d expect him to be. D 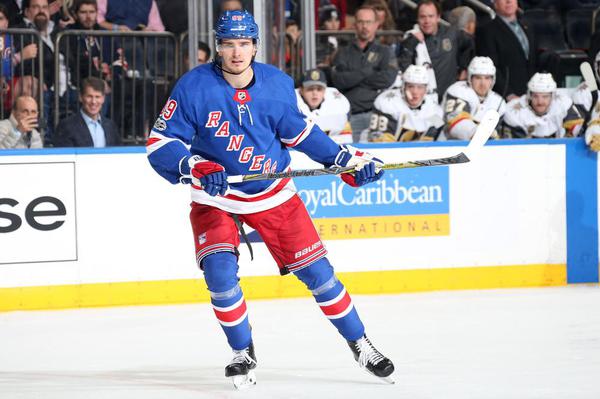 The New York Rangers find themselves in a bit of a funk. As a contending team, they are not playing like one by any means, and it shows in their record. There are a number of reasons why this is. One of these reasons, however, is the deployment of players and the roles that they are playing in is all jumbled up. If the Rangers play the right players, they could find themselves in a much different and improved position. This means that roles of players need to change. Here are three players who 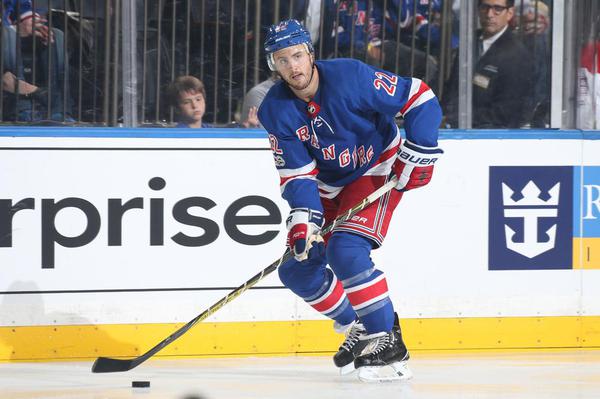 New York Rangers: What if McDonagh and Shattenkirk doesn’t ever work?

It is no secret Kevin Shattenkirk is elite when he has the puck. From his pass to his shot and even the way he handles the puck, Shattenkirk is a forced to be reckoned with. Playing alongside New York Rangers captain Ryan McDonagh is undoubtedly a welcome one for Shattenkirk, as the two played together for Team USA in the Olympics and the World Cup of Hockey. The two seem to be a perfect pairing, but as the season progresses, there is a chance, however small it is, that the two might not be the 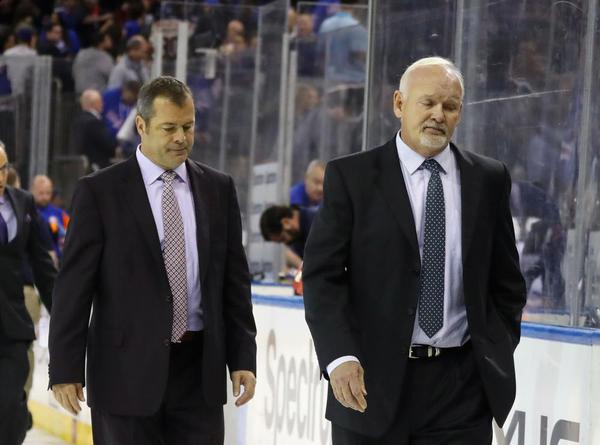 New York Rangers: There is no center to be had

The New York Rangers are struggling. Between the coach not adequately doing his job and players not doing what they are paid to do, the team already seems to be falling out of a playoff spot. The most prominent reason other than Alain Vigneault is the absence of a center. Something, the Rangers might have to wait a while for. Maybe as long as a year or two. Mika Zibaenjad has quietly played well in his first few games as the Rangers top center. Unfortunately, his excellent work has gone underap 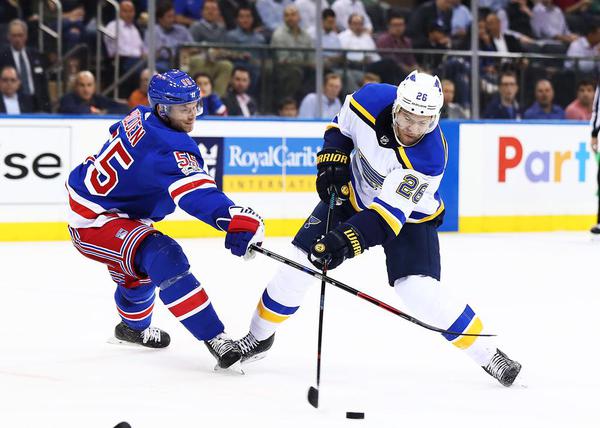 The Rangers expected over the summer that they could roll out one of the best defensive corps in the NHL. Kevin Shattenkirk believed that he would be playing alongside Ryan McDonagh and everyone in the NHL thought the Rangers would be much better than they are now. Of all the thoughts and beliefs fans and analysts, none of them ever predicted Nick Holden, the Rangers resident mess would be getting as much ice-time as he has. Nick Holden has been a subject of a few trade rumors since the summer 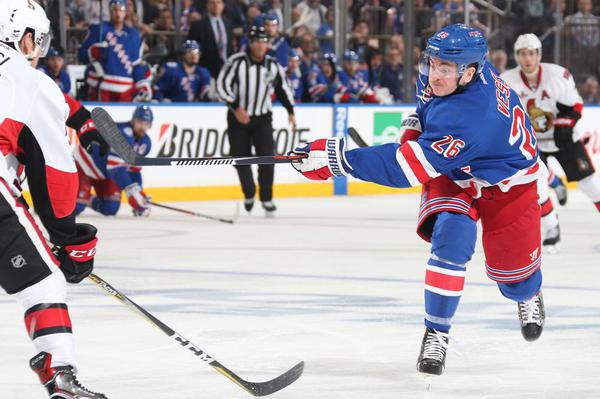 Jimmy Vesey had a solid rookie season. While he certainly did not play like Auston Matthews, Vesey contributed enough to propel the New York Rangers into a comfortable spot in the Eastern Conference. Last season, Vesey recorded 16 goals and added 11 assists for a solid 27 point total on the year. Again, his play was not comparable in any sense to any of the finalists for the Calder trophy, but the little things he does makes him a valuable asset to the Rangers. Jimmy Vesey once scored 32 goals 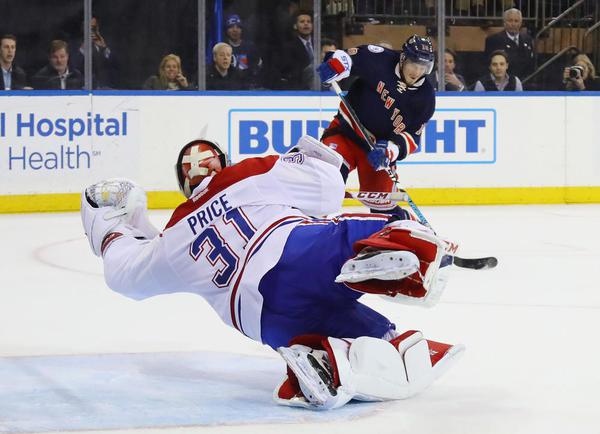 New York Rangers: Where is the offense coming from?

The expectations are high for this New York Rangers team. Having a legitimate top four defense is something that the Rangers have lacked for a long time. With the defensive problem finally solved, many believe that no more work needs to happen on this team. However, the Rangers are now missing a crucial piece to the puzzle. That piece is a number one center. If General Manager Jeff Gorton does not fix this problem, this Rangers team, despite the big offseason acquisition, will see another early 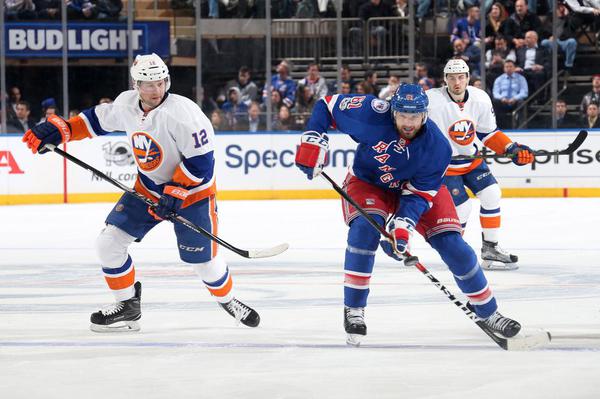 Preseason games are not usually the most exciting events in the NHL. The Rangers preseason opener against the New York Islanders was no different. In a game full of penalties and constant stoppages in play, fans and coaches alike were still able to see the great potential this team has. The Rangers seventh overall pick Lias Andersson made his NHL debut along with college free-agent signing Neil Pionk. Both of these players were absolute standouts and have a great chance to make the team out of 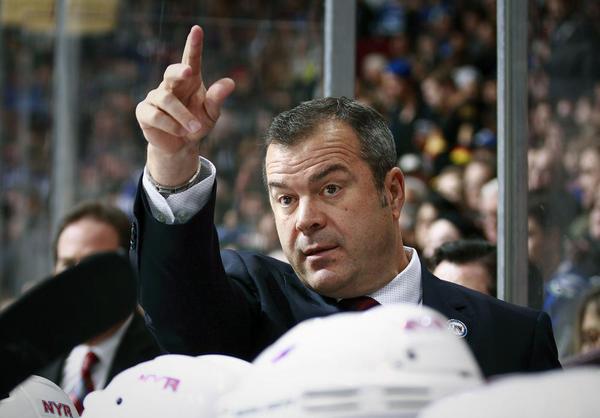 New York Rangers: This is an important season for Alain Vigneault

VANCOUVER, BC - NOVEMBER 15: Head coach Alain Vigneault of the New York Rangers during their NHL game against the Vancouver Canucks at Rogers Arena November 15, 2016 in Vancouver, British Columbia, Canada. (Photo by Jeff Vinnick/NHLI via Getty Images) Coaching is a big part of any team in any league. The New York Rangers learned this the hard way as their coaching was a large reason why they lost in the second round of the playoffs. S hortly after, the Rangers made a big splash behind the benc 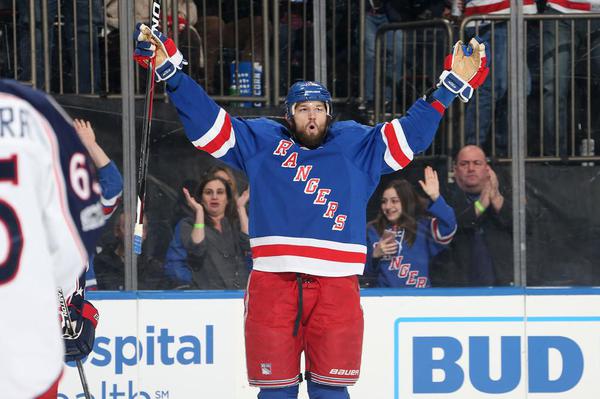 Rick Nash has been a staple in the Rangers lineup for the past four seasons. Following the trade in July of 2012 that sent him to Broadway, Nash has made a name for himself in positive and negative ways. Famously, Nash has been the center of many fan and analyst negativity calling for him to be moved because of his lack of production. The biggest argument fans have with Nash is his consistency. When he is on a hot streak, all is well. However, once Nash enters a slump, it could take weeks for 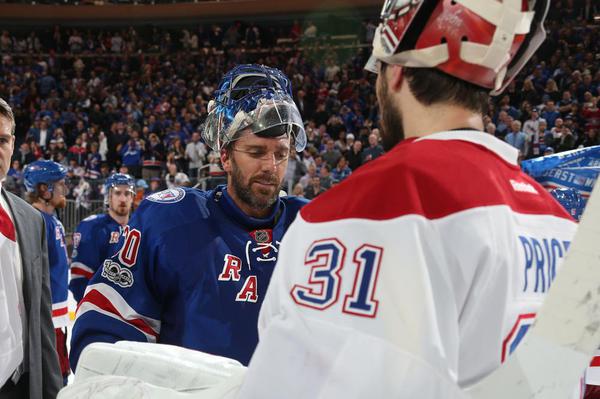 In a league that boasts so much skill in the crease, it can become almost impossible to rank the best in the world of goaltending accurately. However, using advanced stats, a more definitive list was created. While there are arguments to make about all of the following 10 goalies, one thing is for sure; this is the most accurate list we could make. From players like Carey Price to Anders Lindback, each goalie possesses a unique skill set that sets them apart from their counterparts. The advanc 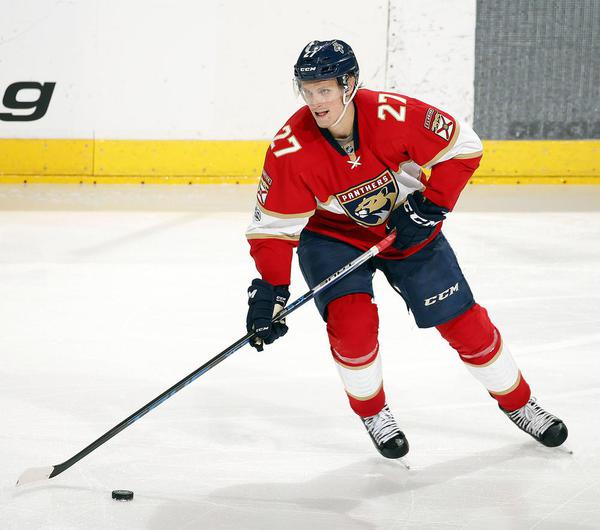 With a young core and the addition of former Ranger Keith Yandle, it came as a surprise to many that the Panthers finished with a 35-36-11 record last season. On top of a disappointing year in Sunrise, FL, the Panthers front office and bench received a major shakeup. Currently, the team going out on the ice relies on the decisions of rookie head coach Bob Boughner and general manager Dale Tallon. Considering the fact that the Panthers were not very good this past season, one would think they wo
Close ✕

Thank you for subscribing!

You will receive an email (at most once a week) with any new articles.

You can unsubscribe anytime with a link in the footer of the email.